Strategies to Prepare for AEP 2022

A Retrospective Analysis of AEP 2021 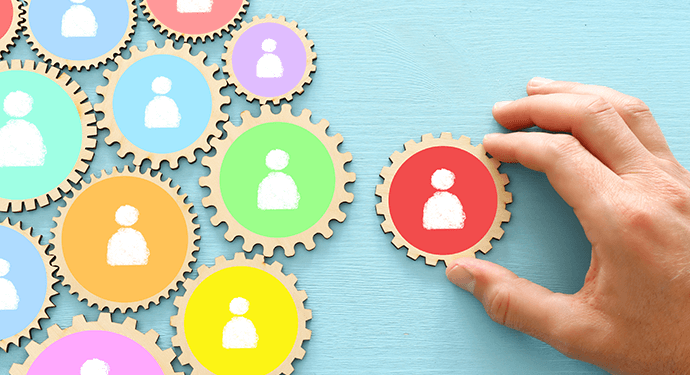 Issue: Enrollment in Medicare Advantage (MA) has grown significantly over the past two decades, with one of three Medicare beneficiaries now covered by these private plans. Yet we know little about their characteristics or experiences.

Goal: To analyze MA enrollees’ demographic, socioeconomic, and clinical characteristics as well as their health care utilization, spending, and quality of care.

Methods: Retrospective observational cohort analyses of Medicare encounter data for more than 2 million MA beneficiaries in 2012 and 1.8 million in 2015.

Key Findings: Between 2012 and 2015, the MA population grew younger and included greater proportions of racial and ethnic minorities. There were also more low-income beneficiaries, more living in poor neighborhoods, and more living in neighborhoods where few residents have college degrees. While chronic conditions had not become more prevalent by 2015, a greater proportion of beneficiaries had complex medical needs. Hospitalization rates were stable, but lengths of hospital stays increased as did use of observation stays and emergency department visits. Spending was 13 percent higher in 2015, largely because of spending on prescription drugs. Performance on several measures of health care quality improved, but medication adherence declined slightly.

Enrollment in Medicare Advantage (MA) plans has grown significantly in the last two decades, from 4.6 million in 2003 to 18.5 million in 2017, representing 33 percent of the Medicare population.1 Over the same period, government payments to these private plans increased to more than $200 billion per year.2 Despite the increasing role of MA, there is little known about the composition, health care utilization, and spending patterns of enrollees.3 For example, although the Centers for Medicare and Medicaid Services (CMS) publishes data on the burden of chronic conditions among beneficiaries enrolled in traditional fee-for-service Medicare, the reports exclude the MA population because “claims data are not available for these beneficiaries.”

MA plans consist primarily of health maintenance organizations (HMOs) and preferred provider organizations (PPOs). Given how the plans are paid — monthly capitated payments for each member — they have incentives to avoid unnecessary utilization, coordinate care, and promote better health. They also have flexibility to provide benefits such as hearing, dental, vision, and care management services that are not offered under traditional Medicare. Plans that achieve designated levels of performance and enrollee satisfaction also earn bonus payments, which they may use to provide additional benefits, such as those related to disease prevention. Starting in 2019 and 2020 under the CHRONIC (Creating High-Quality Results and Outcomes Necessary to Improve Chronic) Care Act, Medicare Advantage plans have the option to offer nonmedical benefits like meal delivery, home modifications, help with daily activities, and other services that may promote health and functioning and help avoid medical complications.5

Our analysis is based on de-identified, nationally representative data drawn from Medicare Advantage members’ medical and pharmacy claims from more than 120 plans. It is the first comprehensive analysis of changes in the MA population between 2012 and 2015, including changes in demographic and socioeconomic characteristics, prevalence of chronic conditions, health care utilization, spending patterns, and performance on selected quality measures.

There is increasing evidence that people’s life circumstances, including their income and living conditions, affect their health and thus their health care utilization, outcomes, and spending.6 A growing number of MA beneficiaries have social risks that if unaddressed could lead them to become high-need, high-cost patients. This study used a unique granular source of social risk data aggregated at the nine-digit ZIP code level representing 30 million neighborhoods with an average of five households. From 2012 to 2015, the number of beneficiaries with median incomes below $30,000 increased 35 percent (Exhibit 2). The proportion of those living in a neighborhood where 20 percent or more of households lived below the federal poverty level increased by 29 percent, while the proportion in a neighborhood where less than 20 percent had a bachelor’s degree increased by 20 percent. 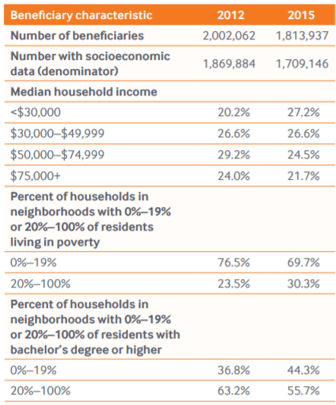 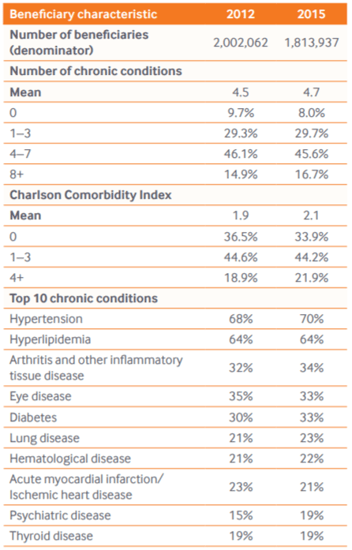 The prevalence and rank of chronic conditions was similar in 2012 and 2015. The five most common chronic conditions in both years were hypertension (diagnosed in 70% of beneficiaries in 2015), hyperlipidemia (64%), rheumatoid arthritis (34%), eye disease (33%), and diabetes (33%) (Exhibit 3; see Appendix A for complete list of top chronic conditions).

We applied algorithms developed in a previous analysis of the Medicare fee-for-service population to categorize patients into clinical groupings, or segments, using 29 chronic conditions.8 The clinical segments are designed to help health care providers and payers better target interventions and control costs, especially among high-need beneficiaries. These segments (defined in “How We Conducted This Study”) are:

Results indicate that the MA population was distributed similarly across the segments in 2012 and 2015, with some notable exceptions (Exhibit 4). While the largest proportion of MA beneficiaries fell into the minor complex chronic segment in both 2012 and 2015, there were declines in the minor complex chronic, simple chronic, and relatively healthy segments and increases in the disabled under age 65 and frail elderly groups. The frail elderly segment indicates the presence of two or more frailty indicators, such as difficulty in walking, falls, and muscle weakness. 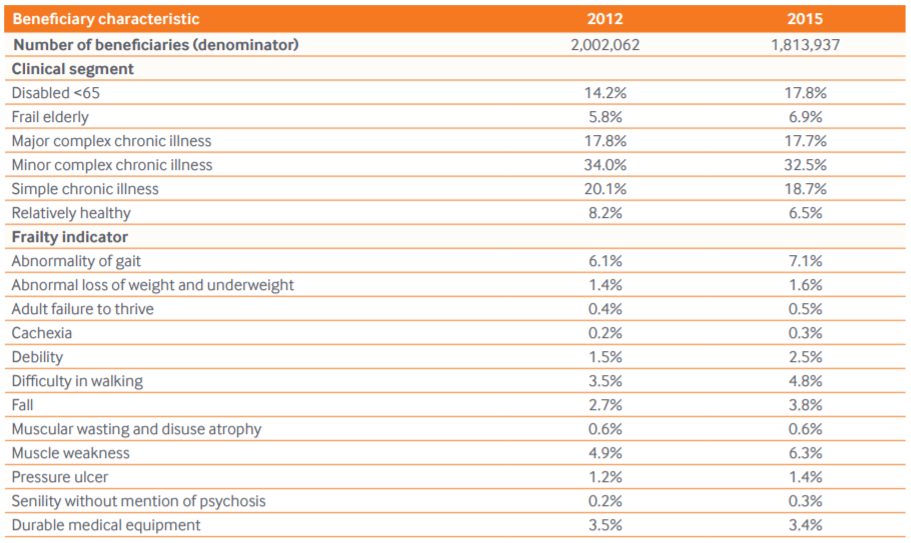 Rates of hospitalizations, outpatient visits, prescription drug fills, and the number of unique medications per member were stable from 2012 to 2015, but there was a significant increase in observation visits (43% higher) and emergency department visits (23% higher) (Exhibit 5). (Observation visits last no more than one night and give clinicians time to decide whether patients should be admitted to the hospital.) The average length of hospital stays also increased by 22 percent, indicating those who were admitted to the hospital were sicker on average in 2015 than in 2012. 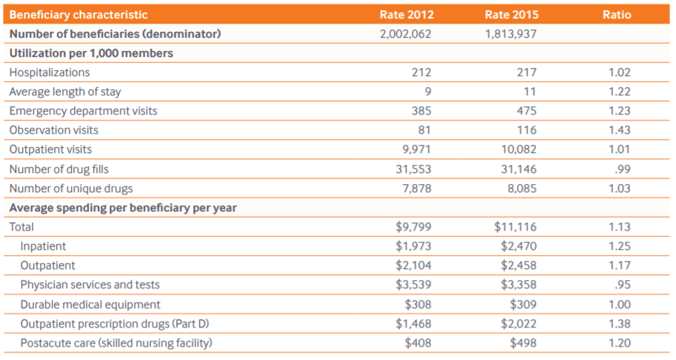 High-Cost Beneficiary Spending by Category, 2012 and 2015 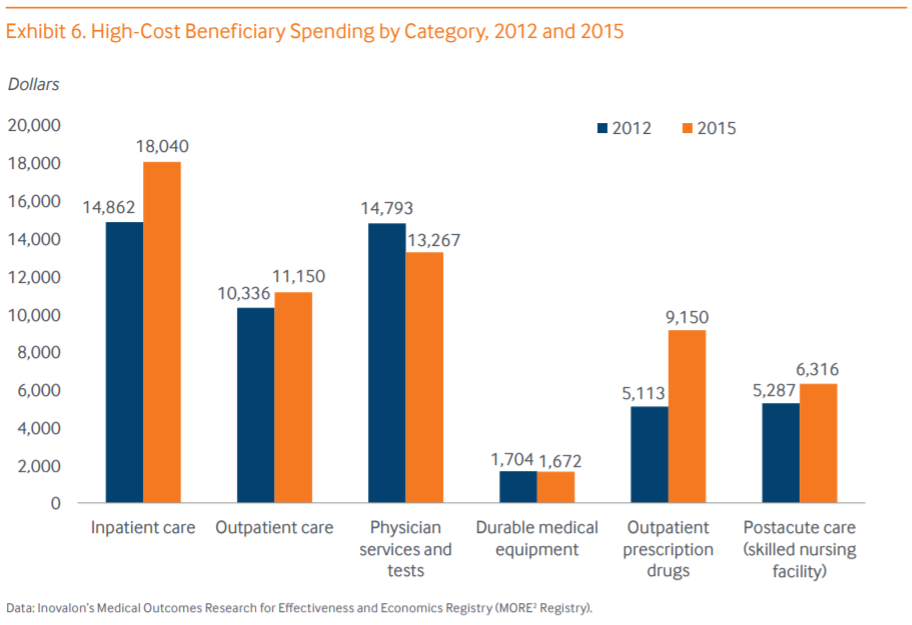 About a third of all Medicare beneficiaries are enrolled in MA plans, but we know much less about their experiences than those of traditional Medicare enrollees. To our knowledge, this is the first study to profile and segment the MA population and evaluate recent trends in their demographic, socioeconomic, and clinical characteristics, as well as their health care utilization, spending, and quality.

We found major changes in the MA population from 2012 to 2015. Beneficiaries were younger on average because more people under age 65 qualified for Medicare due to disability. There were also more racial/ethnic minorities and more people with low incomes enrolling in MA. The proportion of MA beneficiaries enrolled in a Special Needs Plan for dually eligible beneficiaries more than doubled from 2012 to 2015. And more beneficiaries had social risks that could eventually make them high-need, high-cost patients. Further investigation is needed to evaluate whether these changes are driven by changes among Medicare beneficiaries generally, changes among those who select an MA plan, or by entry and exit of MA plans available in the market.

While the prevalence of chronic conditions among MA beneficiaries was relatively stable from 2012 to 2015, beneficiaries became more medically complex. More beneficiaries had multiple comorbid conditions, indicators of frailty (i.e., had difficulty walking, muscle loss, senility, or functional problems), or enrolled in Medicare because of disability.

Hospitalization rates, outpatient visits, and medication use were stable from 2012 to 2015, but there was a significant increase in observation stays and emergency department visits. The average length of stay also increased, indicating that on average those who were admitted to the hospital were sicker.

MA beneficiaries had lower rates of potentially avoidable hospitalizations and hospital readmissions in 2015 than in 2012. There also was a significant decline in the use of high-risk medications, which may be linked to lower rates of hospitalizations. There was a slight increase in the breast cancer screening rate, but adherence to medications to treat cholesterol, diabetes, and hypertension declined slightly.

Our findings suggest that MA plans will need to develop targeted interventions to address social and medical risks among beneficiaries who, overall, have become poorer, frailer, and more medically complex in recent years. For example, plans should take steps to reduce complications in high-risk patients and increase adherence to prescribed medications. Several approaches for managing patients with multiple chronic conditions and/or unmet social needs have been shown to improve health outcomes and reduce the costs of care.9 MA plans also need to consider more efficient options and settings for post acute care for an increasingly frail population by expanding use of services in beneficiaries’ homes and engaging in robust management of transitions among care settings. And they may want to exercise new options under the CHRONIC Care Act to offer supplemental services to vulnerable beneficiaries.

Further research analyzing health care utilization, spending, and quality among different groups of MA enrollees would provide additional insight into the characteristics of the most high-need patients and enable plans to create targeted strategies to serve them.

Agents: The Key to Maximizing the Growing Dual Eligible Opportunity